Celebrating 14 years of philanthropy in the Tri-Cities community, The Cameron Foundation approved new grant funding for 25 organizations in October. The awards total $867,400.

In the ceremony to celebrate its 14th anniversary, Board Chair Pam Martin Comstock announced that the latest funding from this October cycle brought the Foundation’s total giving to more than $86 million. The Foundation was formed in 2003 and began grantmaking in October 2004.

During her remarks, Comstock also reflected on the ways the Foundation has diversified its work over that time. Cameron primarily began as a responsive grantmaker in the early years. “This process of reviewing and responding to requests from nonprofit organizations and government agencies remains still an important cornerstone of our philanthropic work 14 years later,” she said. Simultaneously, the Foundation has benchmarked against peers to develop other philanthropic tools. In addition to responsive grantmaking, Cameron now applies proactive grantmaking, capacity-building programs and impact investing to its strategic work. “In combination, these strategies aim to increase the Foundation’s ability to transform the Tri-Cities and surrounding counties into a healthy, vibrant and economically vital region,” Comstock said.

The full list of responsive grants for the October cycle includes:

The Foundation’s president, J. Todd Graham, explained how the decision to pursue a teacher residency program was born out of the Foundation’s research as well as its work with the school system to craft a comprehensive, five-year strategic plan, Innovate 2022. Research showed that nearly one out of every five teaching positions in PCPS previously had been filled by a substitute teacher. By comparison, the statewide average was only 0.3%. Innovate 2022 identifies “the need to improve and recruit educators as PCPS’s most urgent priority.” Graham concluded, “In large part, we believe that the success of Innovate 2022 hinges on having a solid teacher workforce.”

Dr. Kim W. McKnight, director of the RTR-Petersburg Teacher Residency program, included the inaugural cohort of Petersburg teacher residents, coaches and principals to make a presentation on the launch of the program this academic year. Each year for five years, RTR-Petersburg will bring in a new cohort of teacher residents, with an estimated 60 new teachers incorporated into the Petersburg school system by the close of the five-year period. Dr. McKnight noted, “We help recruit, train, and retain high quality teachers for years to come in PCPS. What sets us apart is that we are not just preparing teachers, we are preparing extraordinary teacher leaders who will commit to the Petersburg community for at least four years.”

The three teacher residents from the Cameron-funded pilot program at Chesterfield’s Ettrick Elementary School also joined the presentation. “We were the first three who were willing to take a risk and join a program that was piloted last year, and we couldn’t be happier we did it,” said Ettrick teacher Sydney Lilly. 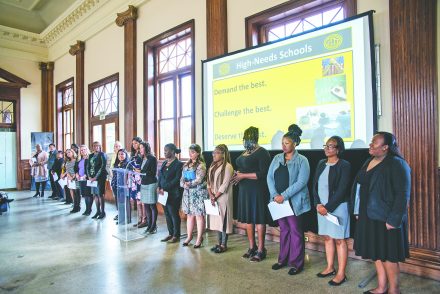 In addition to the presentation by RTR Petersburg Teacher Residency, the Foundation’s ceremony featured Emiko Atherton as The Cameron Foundation’s 2018 Cleveland A. Wright Lecturer. Atherton is director of the National Complete Streets Coalition, a program of Smart Growth America. She draws from her expertise in transportation policy, public health, land use, economic development, and legislation to consult with communities across the country on how to create better transportation networks. Atherton’s lecture underscored the integral connections between the built environment, public health and health equity.