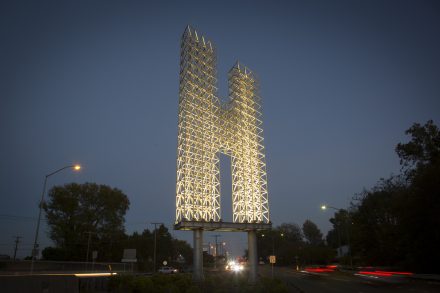 The Hopewell Community Gateway, located at the east end of the Route 10 bridge traveling into the city, features the sculpture “Return,” by international artist Ralph Helmick, as its centerpiece. Standing 65’ high, the artwork is made of open steel framework that is reminiscent of the city’s industrial landscape. Photo by John Henley

The City of Hopewell and The Cameron Foundation celebrated completion of their major $1 million cooperative gateway project with a dedication ceremony at the site today. The 10,000 square-foot gateway project – which features the iconic sculpture, “Return,” by international artist Ralph Helmick – is located at the Route 10 bridge across the Appomattox River, traveling east into the city. The sculpture serves as the centerpiece to this major gateway into the city, which also includes extensive landscaping, lighting, decorative paving and other site improvements.

In selecting the location, Hopewell officials identified the site as a key corridor for travelers entering the city. It has been targeted for economic development, with several projects under way or now completed. During the ceremony, Hopewell City Council member Christina J. Luman-Bailey noted that the new Boathouse Restaurant, adjacent to the Gateway site, had served over 100,000 people within the past year. The city’s river walk, which is under construction, has received a grant for its phase two, which is expected to complete the route from downtown to the Gateway. Citing several additional examples of business growth in the commercial, industrial, and housing sectors, Bailey concluded, “Each piece is a part of the puzzle that will create the Hopewell that we all envision is possible.”

“An important part of Cameron’s contribution to the project was commissioning the sculpture and gifting it to the City of Hopewell,” said The Cameron Foundation’s President, J. Todd Graham. He added, “When competing regionally and nationally, communities that utilize public art as a key component of their economic development strategy set themselves apart and often gain an edge in attracting visitors and investment to their community.”

The artist, Helmick, was chosen for the project by an artist selection committee of Hopewell city representatives as well as Cameron representatives. His sculpture, “Return,” is a monumental letter “H” made of open steel framework that is reminiscent of the city’s industrial landscape. The structure itself is 51’ tall, approximately 20’ wide, and over 6’ deep. It is made of approximately 4,500 linear feet of stainless steel and has a brushed finish. The estimated weight is 14,000 lbs. With the addition of its base, the art stands 65’ high. Twelve floodlights dramatically illuminate the sculpture at night.

The Gateway grounds have been landscaped, and the median and edges of the surrounding roadway were enhanced with terra cotta colored concrete. JunoWorks fabricated the sculpture at its facilities in Colorado, and Chroma Design was the landscape architectural firm on the project. Costs for infrastructure, landscaping and other site improvements were shared by the two partners. Overall, the foundation and the city contributed equally to the total cost of the gateway project. 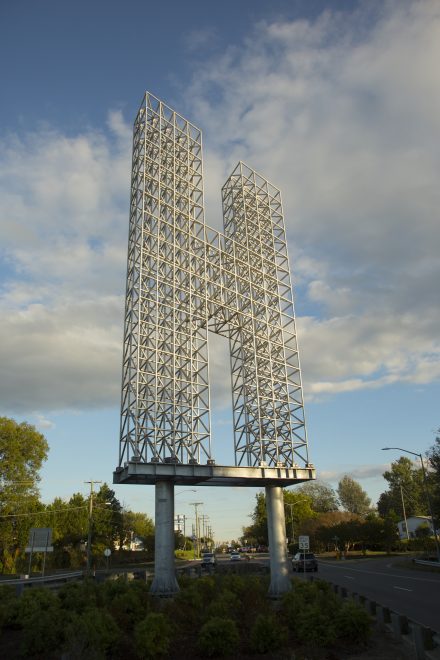 “Return,” by international artist Ralph Helmick, as seen by day, traveling east into the City of Hopewell. Photo by John Henley