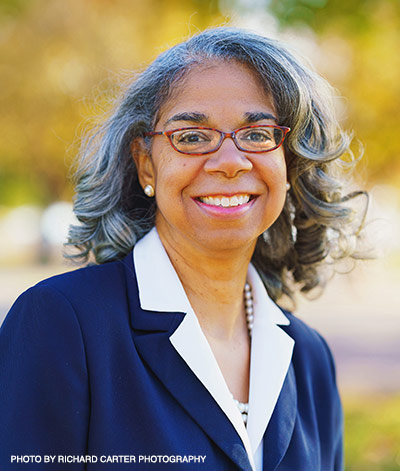 After a comprehensive national search, The Cameron Foundation is pleased to announce the appointment of Nadine Marsh-Carter as the next President of the Foundation. She succeeds J. Todd Graham, whose planned retirement after ten years as President had been announced previously.

Since 2006, Ms. Marsh-Carter has been President & CEO of Children’s Home Society of Virginia, a nonprofit committed to building permanent families and lifelong relationships for Virginia’s at-risk children.

Pam Comstock, chair of the Foundation’s executive search committee, applauded the committee’s choice. “Nadine has built an impressive record of progress for vulnerable and under-served populations throughout her career. More broadly, her reputation for leadership and impact well beyond her own organization’s essential mission reflects the scope of her interests and influence. We are excited by the energy and perspective she will bring to the Foundation’s work and to the communities we serve.”

“I am truly honored to be named The Cameron Foundation’s President,” noted Marsh-Carter. “The opportunity to continue the impressive legacy that Todd and the Foundation’s board and staff have created in the Tri-Cities region is both humbling and thrilling.”

Tolleison Morriss, Chair of the Foundation’s board, acknowledged the special nature of the appointment. “Both Todd Graham and his predecessor, Handy Lindsey, had formal experience as foundation heads when they joined Cameron. It is testimony to Todd’s leadership and the Foundation’s record of strategic impact that an experienced nonprofit CEO would be the board’s unanimous choice as our next President. Nadine’s history on the boards of two health legacy foundations—Jenkins Foundation and, earlier, the Richmond Memorial Health Foundation—deepened her appeal to us.”

During her sixteen years as CEO of Children’s Home Society of Virginia, Marsh-Carter has driven expanded, innovative programming to address unmet community needs while promoting systemic change on behalf of children in need of permanent families as well as those aging out of foster care.

Marsh-Carter began her career as an attorney with Hill, Tucker & Marsh, after which she served several years as Executive Director of Volunteer Families, formerly VEFC. She became involved with CHSVA first as a volunteer, then as an adoptive mother, and then as a board member. She became CEO in April 2006.

Marsh-Carter has a long history of community engagement and leadership. Her current board appointments include Longwood University, and she has served on numerous advisory boards and councils, both regionally and nationally. She was elected to the board of Richmond Public Schools in 2016 but stepped down the following year upon the death of her husband.

The Foundation’s executive search committee consisted of Pam Comstock, Tolleison Morriss, Vandy Jones and Jeff Geisz. Commented Comstock, “Our search embraced well over 200 sources and prospects from across the Commonwealth and at least 27 other states. We are especially gratified to attract such a seasoned CEO who has had direct experience with the people, institutions and issues important to the Foundation’s mission and service area.

Nadine Marsh-Carter earned her bachelor of arts in political science and journalism and her juris doctor degree from the University of Richmond. She is a graduate of the Hull Fellows program of Philanthropy Southeast (formerly Southeastern Council of Foundations), and she has been a Pat Asch Fellow for Social Justice, sponsored by the Richmond YMCA.

The Cameron Foundation’s search committee was assisted by BoardWalk Consulting, a national executive search firm specializing in CEO recruitment for foundations and nonprofits. This was BoardWalk’s third search for the Foundation, having been the Foundation’s partner in its prior CEO searches in 2003/4 and 2012.

Of her new appointment, Marsh-Carter commented, “My life experiences reflect my commitment to working as a servant leader for communities of great promise. I commit my all to The Cameron Foundation, and I look forward to the new relationships and the new opportunities ahead.”

Ms. Marsh-Carter will be relocating to Petersburg in December and will begin her tenure as President of the Foundation on January 3, 2023.